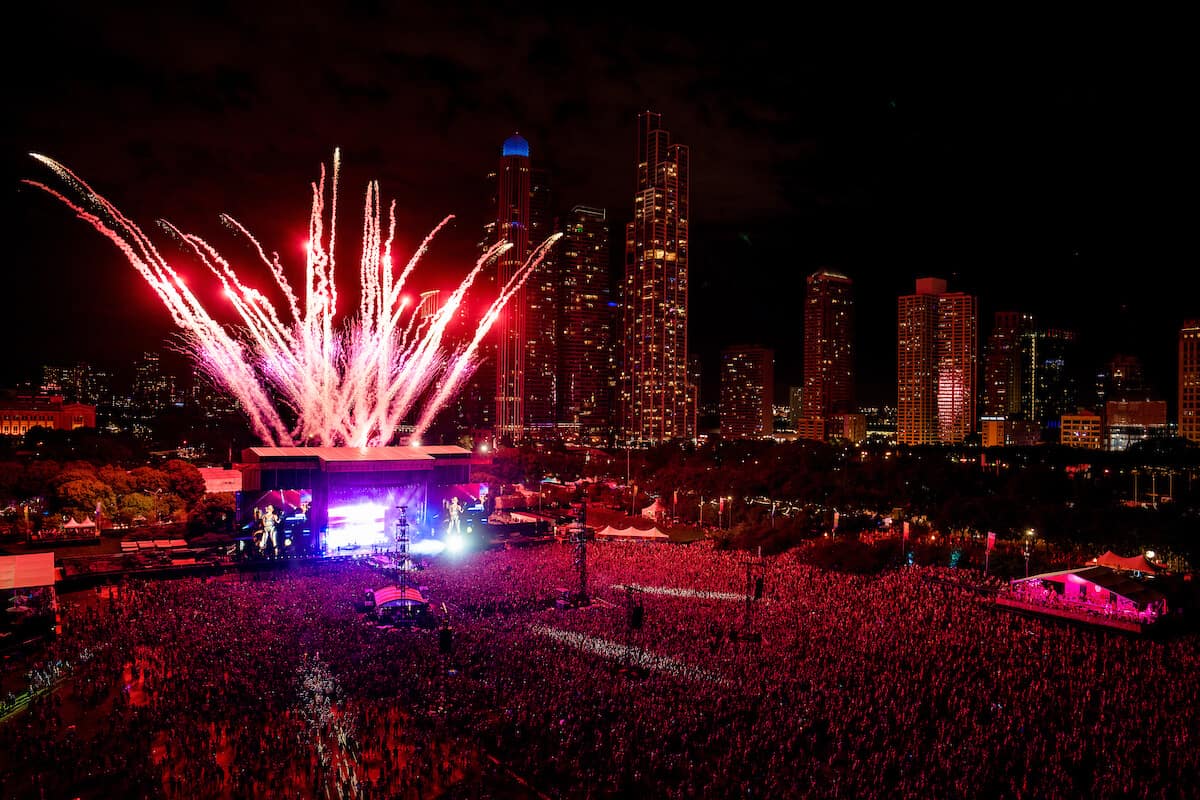 Lollapalooza 2022 is etching its name in the history books: Full recap

Lollapalooza etches its name in the history books with the 2022 edition: Full recap

As we approach one week since the conclusion of Lollapalooza 2022, difficult to say that there has been a more iconic edition than the one that has just taken place. From barrier-breaking performances to incredible crowds and one of the best event atmospheres of any promotion, Lollapalooza put on a near-perfect festival and set the bar high for the rest of the year.

With nearly 400,000 people travel to Grant Park in the city center of Chicago, there was a lot of anticipation for what lay behind the doors of the event after the 2021 edition proved that Lollapalooza could easily be the premier festival in the United States. The festival should not only replicate the unique atmosphere it created, but those in the lineup should live up to last year’s iconic performances from the Foo Fighters, Illenium, Post Malone and of course, Tyler the Creator. But to no one’s surprise, Lollapalooza 2022 broke through the ceiling in more ways than one and hosted an all-time high four-day experience.

The clock struck twelve, and the first day of Windy City’s most iconic event was upon us. As attendees walked through the entrance and into the park, what awaited them were four full days of unforgettable magic. Lollapalooza hosted 170 acts across its eight stages (T-Mobile, Bud Light Seltzer, Discord, BMI, Coinbase, Solana x Perry’s, Tito’s, Kidzapalooza by Lifeway). From the start, each artist brought their best set, and each audience had untapped energy. It was really special.

Thursday had an incredible lineup to kick off the 2022 edition. With energetic performances from Midwxst, Tove Lo, Com3t, Remi Wold, MK, Billy Strings, Jazmine Sullivan, Lil Baby and a masterclass from an ensemble producer based in San Francisco ZHU, Lollapalooza’s Thursday slate could have held its own at any other festival as the closing day lineup. But we were just getting started.

The day belonged to an act, Metallic. Scheduled to take place at 8:15 p.m. on the T-Mobile Stage, the iconic metal band drew a crowd of over 75,000. The amount of Metallica merchandise that was spotted throughout the day was truly amazing and showed why the band is always more than capable of being the first name at the top of an event’s bill. The show was two hours of pure adrenaline. Metallica played through all of their signature songs with unthinkable guitar solos, pyrotechnic effects, drum breaks, a throbbing baseline and jaw-dropping set design. Even with multiple Lollapalooza appearances, they never disappoint and put on one of the most memorable rock shows inside Grant Park for fans who have been following them since day one and those seeing them for the first time. .

The second day was so much better. As those on stage plugged in their guitars and prepared their vocals, it was hard to decide which stage to head to first, as the daytime schedule was just as impressive as the nighttime schedule. It was Jasiah, Whipped Cream, Glass Animals, Don Toliver, LP Giobbi, Girl in Red, Rezz and Cordaeas well as others, whose sets sent shockwaves through the pitch before the main headliners took over the two main stages.

Both Machine Gun Kelly and Doua Lipa showed why they earned the title of two of the best performers in the entire industry. Those who met at T-Mobile Stadium for the Grammy nominated artist show saw why the ‘Nostalgia for the future The tour is currently considered one of the best experiences of the year. With a colorful production, exceptional choreography and Lipa’s unmistakable voice, the set was straight out of a movie. Across Grant Park, Machine Gun Kelly arguably presented the performance of a lifetime with a page from his ‘General public sale ‘ tour, which he is currently in the middle of. The Cleveland native has scaled structures, smashed guitars and even welcomed the world to “Hotel Diablo” with a few songs from his infamous rap album. The show was one that, no doubt, will live on for many years to come.

Day three got off to another stellar start. Representations of Wallows, EVAN GIIA, Duckwrth, Chocise and Blxst rocked the scenes in the early afternoon. Another brilliant set was an up-and-coming electronic dance artist surf table. His set was one of the most entertaining DJ shows of the entire weekend and showed why he is quickly becoming a notable name in the industry. As the afternoon wore on later, Lil Durk went home to one of the biggest crowds of any non-main stage. big-sean then took listeners back in time with an unforgettable high-energy show. History was written shortly after Tomorrow X Together became the first K-pop group to perform at Lollapalooza.

The night slots consisted of Kaskade, Kygo and J. Cole, all of which put on high-calibre performances. Kygo started the set alongside his longtime colleague Pastor James and even surprised fans with an appearance from the Chicago native luck the rapper. Kaskade once again cemented his legendary status by delivering a set that sent fans on an emotional roller coaster. By the end of the night, J. Cole stormed past a crowd of 80,000 and was then joined by Stockings and JID for a show that rocked the floor of Grant Park.

The last day was bittersweet. It was sad that Lollapalooza was officially coming to an end, but what Sunday had to offer was historic. In just a few hours, I hope of the infamous K-pop group, BTS would become the first South Korean to headline a major American festival. Excitement and anticipation were at an all-time high and unlike anything seen before at an event of this size in the United States. J-hope fans had camped out the day before the third day’s conclusion just to have the chance to get as close to the stage as possible. With over 8 hours to go, the entire Bud Light Seltzer stage area was nearly full.

However, before the final act, the daytime performers set the tone. James Hype, KennyHoopla, ATLiens, Gordo, Charli XCX and Young Nudy all of them did a terrific job, and no matter which shows you picked, you were in for a treat. Then came the time of the young phenomenon, Kid LAROI, to honor the scene as he was the predecessor of j-hope. With a crowd of roughly over 50,000, it felt like The Kid LAROI stopped time as he gave us a glimpse of what to expect on his ‘The end of the world’ round. It will come as no surprise if The Kid LAROI’s name is at the top of the Lollapalooza lineup in just a few short years.

The sun had set for the last time. The skyline came to life behind Lollapalooza, and the time had come for history to be made in Chicago. But before the man of the hour took the stage, co-founder of Lollapalooza Perry Farrell and the mayor of Chicago Lori Lightfoot announced that the City of Chicago and the festival have agreed to a new 10 year contract who will keep Lollapalooza in Grant Park until at least 2032.

Then came the moment that many had been waiting for for more than 20 hours. With over 85,000 people shouting his name, j-hope was quick to emerge from a 20-foot box, and the crowd lit up with BTS’s signature glow sticks, and the madness began. Words don’t do the moment justice, but it will be talked about for ages alongside iconic moments from acts such as the Beatles and Michael Jackson. Featuring a medley of songs from his new album ‘Jack in the box’ and renditions of popular BTS tracks, it was truly a once-in-a-lifetime experience.

But even though j-hope was done, that didn’t mean Lollapalooza 2022 was over yet. On the other side of the park, one of the greatest rock bands of the last thirty years in green day was putting on another iconic show. With a fixed time of almost two hours, they ended the festival on the right foot with a mix of songs from their greatest albums and finished with a solo Billie Joe Armstrong joined only by his acoustic guitar as he sang “Good riddance.” It was the perfect way to end a perfect weekend, because everyone “had time to [their] life.”

It was four historic days in Grant Park. When you left for the last time, it was hard to comprehend the monumental occasion that hundreds of thousands of people from all over the world had just shared. Lollapalooza made a statement with this year’s edition and raised the bar for every event that will take place until Lollapalooza returns in 2023 to raise the standard again. There’s nothing quite like the festival happening in downtown Chicago, and it should be at the top of every music fan’s list. Lollapalooza is, as its name suggests, extraordinary.

How to Display Your Favorite Artists as Pokemon Cards