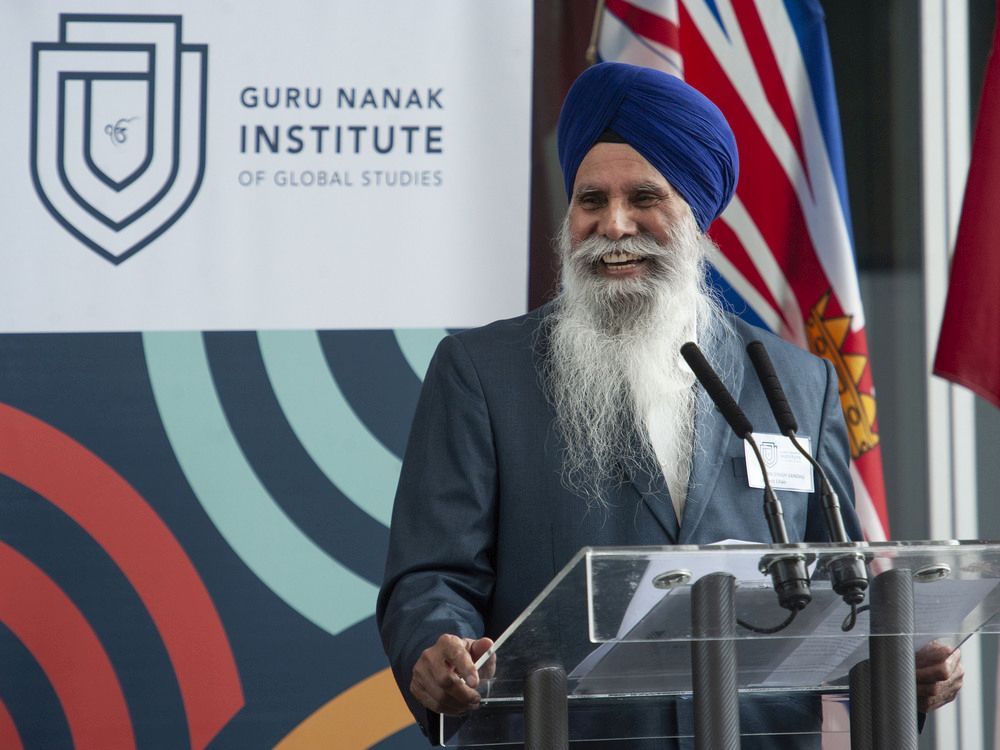 A new private post-secondary school inaugurated on Tuesday offers students a diploma in Sikh studies that it calls the first in Canada.

The new school, called Guru Nanak Institute of Global Studies, is named after the founder of the Sikh religion. It will begin online-only classes, possibly as early as next month, but its founder and chairman of the board said he plans to eventually build a campus somewhere in British Columbia.

“We will need 50 to 100 acres,” said Gian Singh Sandhu, who was joined at the GNI launch in the Surrey Town Hall lobby by local politicians and an official from the Surrey campus of the Simon Fraser University, which hopes to one day partner with GNI to offer courses, possibly in Sikh Studies.

He called the GNI “innovative” and said the school could offer courses similar to South Asian courses offered by universities that would specifically allow Sikhs to “go deeper into what Sikhism is”. It could be a chance to understand their cultural roots.

He said it could also be to “develop programs for people like me” who want to better understand Sikhism “to foster more tolerance as a country and a society.”

SFU has a mandate to provide equity, inclusion, and diversity in its programming and policies, and may be interested in partnering with GNI in the future on courses.

The institute will initially offer three programs “specifically focusing on Sikhism from an academic perspective, versus a religious perspective,” according to a press release.

The Diploma in Sikh Studies will offer seven courses designed to enable students to master the reading and writing of Punjabi and to study Sikh religious, moral and social values ​​”in order to have a solid understanding of the Sikh ethos and how they connect to social justice”.

Students can also complete a Punjabi Studies Certificate for Language Proficiency and Proficiency, or the Gurmat Music Diploma, which would prepare students for a career or a path to the tradition of singing the Sikh spiritual hymn, depending on the communicated.

Mehtab Singh, a second-year health science student at Kwantlen Polytechnic University, said he would be interested in learning more about his religion. He said he sees the RNB as a positive step to encourage more Sikhs to enroll in post-secondary education.

Sandhu said the council is working to get the school accredited by the province and said 75 faculty members from schools around the world have agreed to teach at the school. The intention is to eventually expand the curriculum to include academic and business courses and to foster research.

He said the university is privately funded and non-profit. It has a “liberal” scholarship policy for students who cannot afford tuition.

Registration is open to students of all backgrounds, religions or beliefs.

More news, less ads: Our in-depth journalism is possible thanks to the support of our subscribers. For just $3.50 a week, you can get unlimited, lightweight access to the Vancouver Sun, The Province, National Post and 13 other Canadian news sites. Support us by subscribing today: The Vancouver Sun | Province.

Sign up to receive daily news from the Vancouver Sun, a division of Postmedia Network Inc.

Thank you for your registration!

A welcome email is on its way. If you don’t see it, please check your spam folder.

The next issue of Vancouver Sun Headline News will soon be in your inbox.

We encountered a problem during your registration. Try Again

From Australia to Amsterdam via “Africa”

Development of a Handbook on Disability and Alternative Curricula